HANDS OFF CUBA! THE IMPERIALISTS’ PLANS WILL FAIL ONCE MORE!

The response of the "civilized west" to the humanitarian work and international assistance offered to dozens of countries by Cuban doctors during the pandemic has been to harden blockade (the so-called"embargo") by the US government and its allies.

The goal is obvious, the economic suffocation of the island in order to force its people to surrender from hunger, in order to turn the people against the government and their Revolution.

The Cuban people are once again giving lessons in humanity and dignity as they go through these difficult times. However, the administrators in Washington believe that now is the time to organise destabilizing actions and multiply them through virtual reality and other special effects, attempting to provoke a traditional "colourful revolution."

The first act of this plan were the events of July, which they organized, funded and then attempted to present as "a spontaneous protests.” This was supported by the European Union (with the well-known resolution of the European Parliament) and slavishly supported by the Greek government.

On November 15, the second performance of the same play was announced, which they again hope to portray as a 'revolt' by the Cuban people. The United States are threatening new measures to toughen the blockade – they are even threatening with intervention – if the Cuban Government 'reacts'.

The José Martí Cultural Association - Solidarity with Cuba, condemns this operation of intervention in the internal affairs of Cuba and stands militantly and firmly by the side of Cuba.

We call on every progressive person, every organization or group to condemn the new imperialist attack against Cuba and to demand, together with the thousands of Cuban friends in our country:

An immediate end to the criminal and genocidal economic, commercial and financial blockade that the US has imposed on Cuba for six decades.

CUBA IS NOT, WAS NOT AND WILL NEVER BE ALONE! 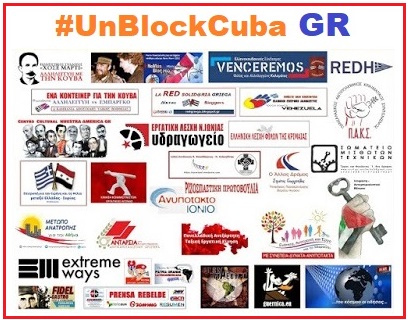